Written by Customer Success Team
Updated over a week ago

How are the models interpreted?

In this section you will see detailed information about the desired forecast along with its indicators, graphs, etc. 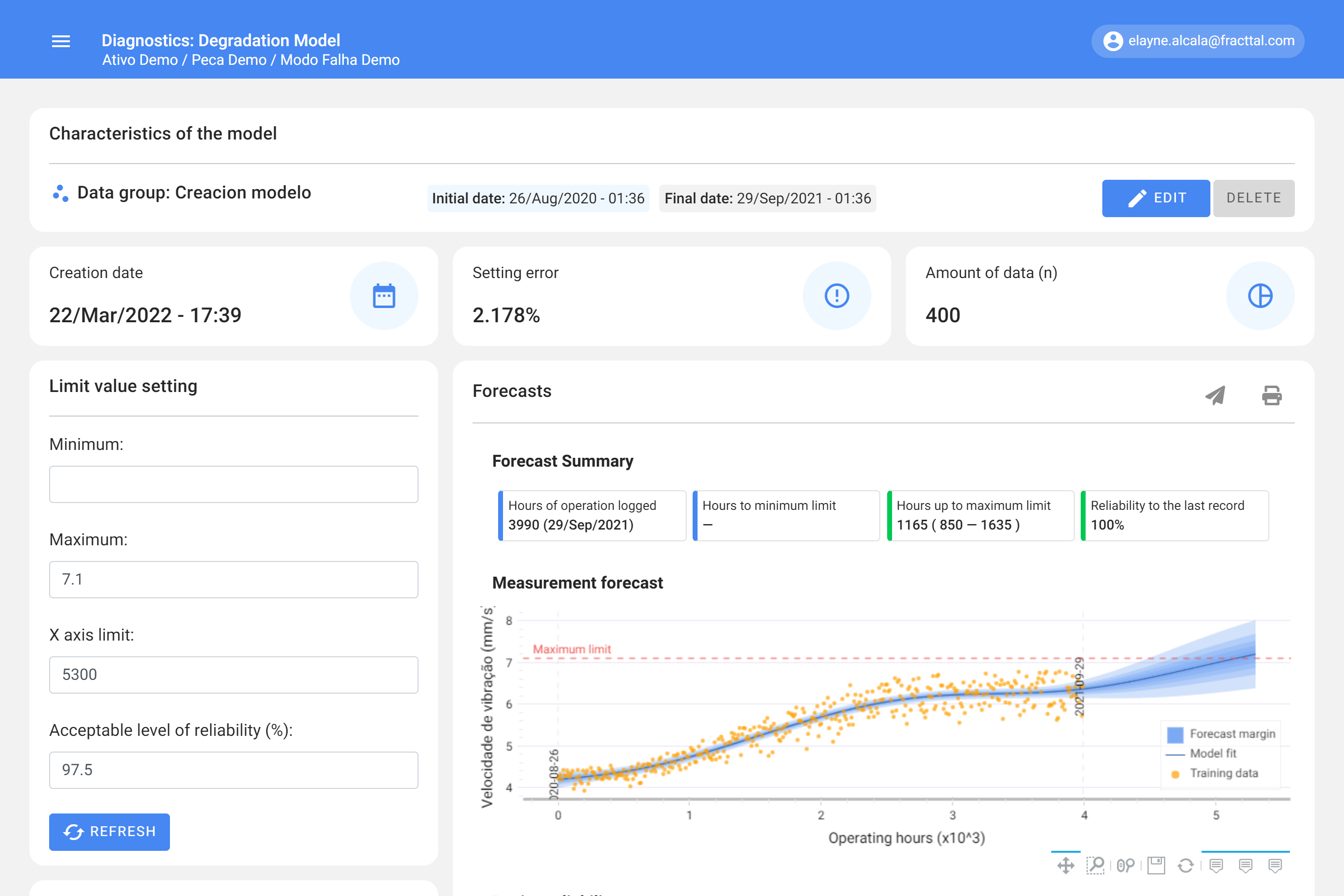 Interpretation of a deterioration model

Interpretation models allow you to study the state of an active over time. In Predictto we present it to you in a simplified form through graphs: the first presents the evolution of a critical variable over time, and the second the reliability of the equipment in the same period of time.

In the first graph titled “Forecast of measurements,” you can see the evolution of the measured variable during the asset’s hours of operation. The orange points represent the variable’s real measurement data; the dark blue line is the adjustment found by our algorithm; and the shadow in blue tones represents the range of reliability of future values. In simple terms, in the future it’s more likely that the variable will have the value indicated by the center blue line, but in reality it could be found at any point within the blue area.

How is this information useful? The variables monitored might be within the limits that indicate that the asset is working satisfactorily. These limits can be based on a standard or be established by the user according to their knowledge and previous experience.

With this graph, you can know when the variable in question will reach its limit, shown by a horizontal red line. By defect, for vibration analysis this value limit corresponds to that established by the ISO standard 10816-3 for vibration speed. However, you can change this value at any time for another limit (maximum or minimum) that you consider more appropriate, in the configuration panel to the left of the graphs. In the same form you can also edit the value limit of the x axis. That is, until what point in time do you want the variable to be predicted.

From the above we can obtain information about the reliability of the equipment, as seen in the second graph.

As the variable reaches the established limit, you can see a decrease in the reliability of the asset, reaching 0% reliability when our model determines with absolute certainty that the variable has passed its limit (meaning when all of the blue shadow passes it).

As you can see, our model not only tells you when your asset will fail, but it will show you the probability of failure over time.

Interpretation of a reliability model

Reliability models allow you to study the state of one or various assets over time. In Predictto we present it to you in simplified form through the following bars: reliability, system risk, accumulated failures and costs. Below you will see some important concepts related to Weibull: 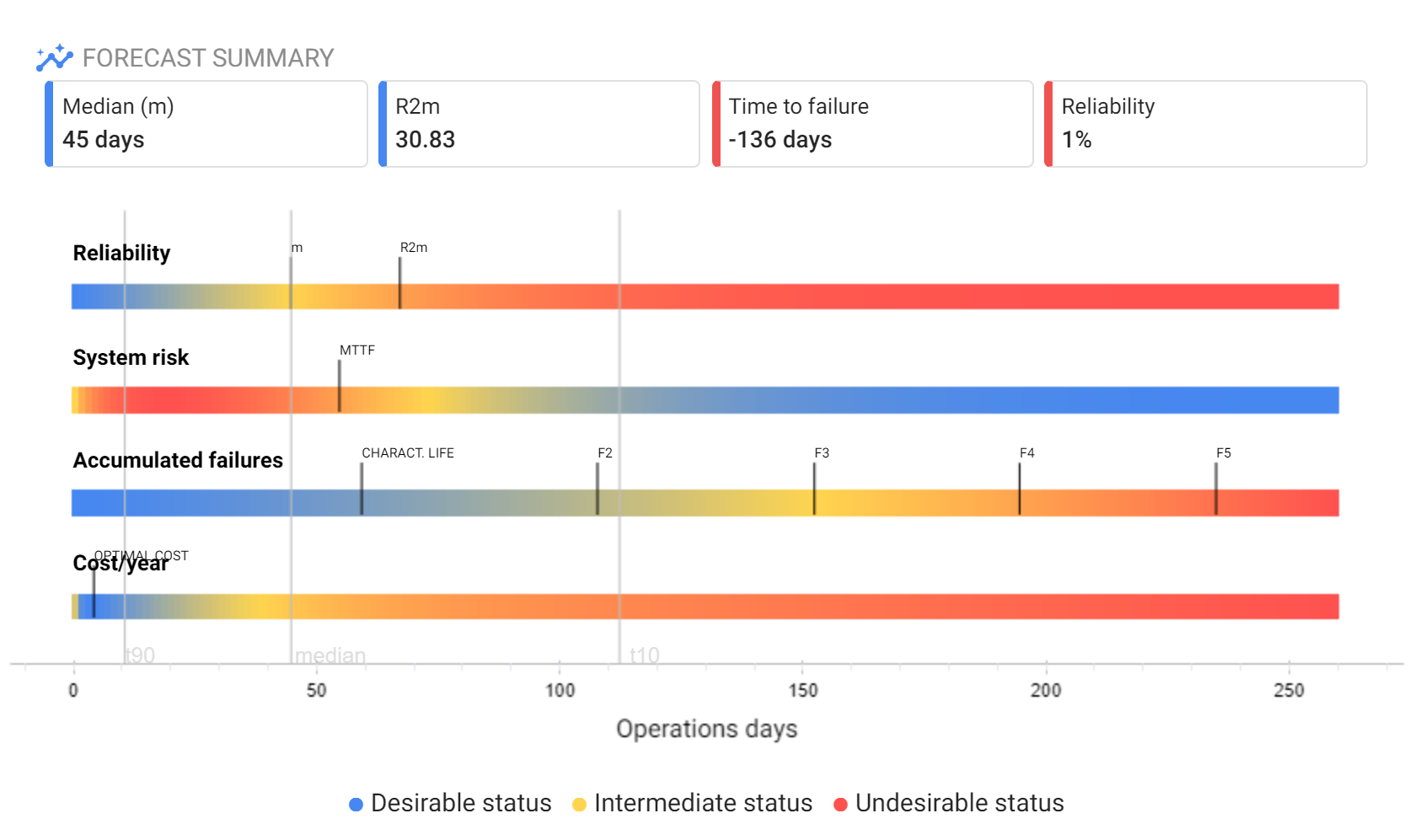 To redo a diagnostic, click on the Edit button. You will find options to change the name, modify the training parameters, and recalculate (Train) with one click, including the most recent data. 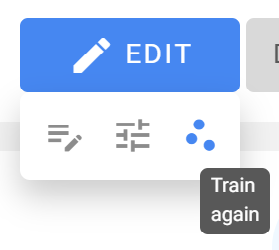 Remember that you can also perform various retrainings from the predictive models section.

Indicators and summary of forecasts

You can view your model’s indicators; hours left until failure along with the reliability of the asset. These indicators are represented by colors, similar to the colors of a traffic light, to be able to quickly evaluate the status of the asset in question. Also, if you hover over the field for each diagnostic, you will see a summarized explanation in natural language of what these indicators mean. Just position your mouse over each one, like in the image below.

Note: If the indicator “Hours until maximum limit” is negative, it’s showing the number of hours that have passed since maintenance was required. It’s also important to mention that the rapid indicators in the table of models carried out is based on this information.

Did this answer your question?